13 Spiritual Meanings Of A Bird Flying Around You 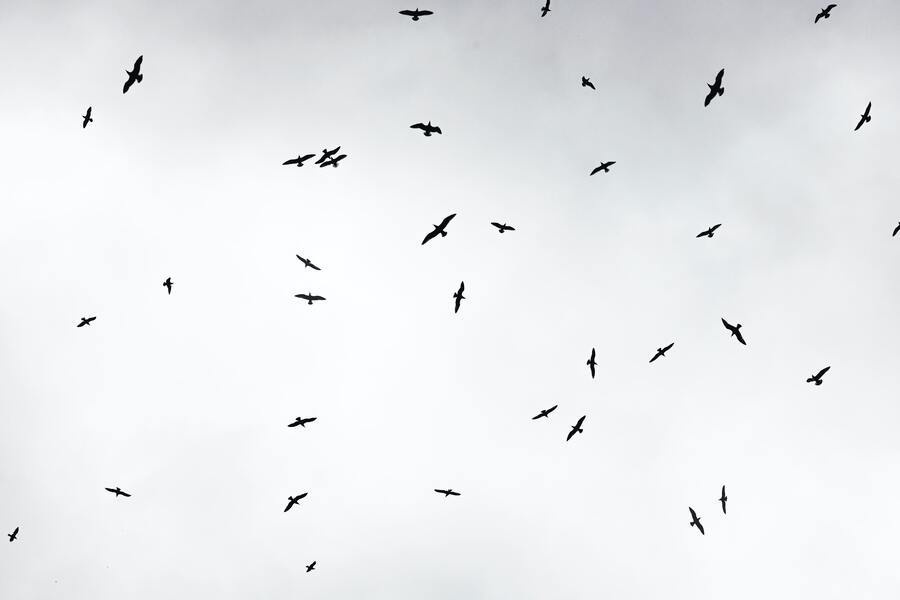 Have you ever been wandering around, admiring nature, and noticed a bird circling or flying around you?

Whether it was one single bird or a collection of birds, have you paused to reflect on the deeper spiritual meaning of seeing them in your life?

If so, then this blog post is for you. Here we explore what 13 different spiritual meanings can be found when watching birds fly around us and how this ancient symbolism can help guide us through our everyday lives.

So grab a cup of tea and discover the ancient secrets behind these feathered friends!

Spiritual Meaning Of A Flock Of Birds

A flock of birds has been a popular symbol throughout cultures, religions, and societies for centuries.

It can be viewed as a sign of unity, protection, and strength.

The spiritual meaning of a flock of birds often represents:

In many cultures, the sight of a flock of birds is considered an omen.

Depending on the type of bird that makes up the flock and its direction of travel or location will determine the meaning behind it.

For example, if you see a flock flying south during wintertime, that may represent an imminent change in your life or environment.

If a group of seagulls gathered by the shoreline, they could be seen as guardians watching over seafarers far from home.

On an individual level witnessing a huge flock can evoke feelings such as awe and wonder – reminding us just how small we are compared to nature’s grandeur, while smaller groups can provide us with comfort.

Knowing that even if we feel alone in our experiences, others are sharing similar paths with us who we can take solace in being part of this collective journey with!

Spiritual Meaning Of Birds Following Me

The spiritual meaning of birds following us is significant and can be interpreted in many ways.

To some, it may represent a connection to the divine or higher power, while to others, it could mean an omen of good luck or a message of hope.

Historically, many cultures have believed that birds are messengers from the gods, capable of providing insight and guidance.

In Christianity, birds symbolize freedom and redemption, pointing towards a heavenly kingdom in the afterlife.

In some Eastern religions, such as Buddhism and Hinduism, birds are associated with liberation from worldly desires and achieving enlightenment.

Similarly, in various Native American tribes, birds were viewed as protectors who guided souls on their journey through life.

The symbolism of birds has also been found in mythology throughout many cultures.

Ancient Greeks viewed pigeons as divinely inspired creatures; Greek gods Hermes and Aphrodite were believed to have used doves to deliver messages between them.

In Norse mythology, Huginn and Muninn (“thought” and “memory”) were two ravens that served Odin by delivering news from all across the world.

In general terms, seeing a bird can symbolize a new beginning or opportunity for growth – whether material or spiritual – being presented to you by the divine.

It could also represent your connection with nature – a reminder that we should be more mindful of our actions and take better care of our planet.

Furthermore, when multiple birds cross paths with us on our journeys through life, it can signify strength in numbers – uniting together for a common purpose, even if we don’t understand why at first glance.

Ultimately, however, the interpretation will largely depend on individual beliefs and experiences; what one person perceives as an omen could mean something completely different to another person.

What Does It Mean When Birds Fly Around You?

When birds fly around you, it can be both a captivating and mysterious experience.

To many, it is seen as a sign of good luck or even a sign from the divine that something special is about to happen.

This phenomenon has been observed across many cultures and religions throughout history.

Birds are associated with the gods and goddesses and are believed to carry messages from them.

The act of birds flying around someone could signify an auspicious occasion, such as during a religious ceremony or a celebration of life.

It could also mean they are protecting you from harm or evil spirits by their presence alone.

Birds may also be drawn to bright lights or objects that are moving quickly, so if you’re dancing or spinning around, this could attract them too!

What Does It Mean When Birds Keep Flying Around My Car?

Birds flying around your car can be a spiritual sign of many things.

It can represent divine protection, good luck, or a reminder that you are loved and supported. Seeing birds come and go in a constant flow could signify new beginnings and changes coming into your life.

If the birds stay for an extended period of time, it could mean that you need to take some time to slow down and find clarity.

Another spiritual meaning behind seeing birds fly around your car is that they are trying to get your attention and pass along a message from the universe.

They may tell you something is about to happen or remind you to stay alert and aware.

When birds keep flying around your car, it’s important to pay attention so that you can interpret what these symbols mean for your life path.

13 Spiritual Meanings Of A Bird Flying Around You

Have you ever been out in the world and noticed a bird that seemed to appear out of nowhere and keep flying around you? If so, it’s possible that this is more than just a coincidence.

In many spiritual teachings, birds have long been seen as symbols of higher knowledge, guidance from the Divine, and transformation — especially when they show up multiple times in meaningful ways.

Whether it’s an eagle soaring through the sky or a sparrow perched near your doorstep, there could be something subtle but powerful at work here.

Read on to learn about the 13 spiritual meanings behind why a bird may be flying around you:

A bird flying around you could signify a new beginning or a fresh start.

It could indicate spiritual renewal, and that new opportunities are opening up to you. Trust in the process, and see where this journey takes you.

When a bird flies around you, it could signify transformation.

It could mean that you’re about to enter a new phase of your life and that you should be open to changes around you.

Birds can also symbolize guidance and direction in times of uncertainty or confusion.

A bird flying near you could indicate that help is coming your way.

Birds can represent joy and happiness; when one flies around you, it could signify that the universe is trying to bring more joy into your life.

When a bird is flying around you, it could also signify wisdom and understanding.

It could indicate that you are about to receive insight into something important in your life and that it’s time to trust your instincts and act accordingly.

When a bird appears in your life, it could indicate that it’s time to shed old patterns and beliefs that no longer serve you.

Let go of the things holding you back and embrace a new beginning.

The presence of birds around you could signify getting creative and expressing yourself more freely.

Bird sightings can also represent the need to explore and discover your true self. This could be a sign to go out and explore the world.

Birds often symbolize a connection with nature or other people.

A bird flying around you could be an indication that it is time to open up and create meaningful connections.

A bird appearing near you could indicate harmony and balance in your life.

Birds can also symbolize abundance, so if one is flying around you, it could mean that you are about to receive more abundance in your life.

A bird flying near you could be a sign to open up to living without limitations.

Finally, if a bird is flying around you, it could indicate that it’s time to have faith in yourself and trust in the divine plan.

Everything happens for a reason, and the universe has your back. All you need to do is trust in the process and take inspired action.

To some people, the answer is yes.

They believe that the appearance of birds can be interpreted as signs from God or other spiritual entities.

For example, a dove may symbolize peace, while a hawk might represent strength and protection.

The large flocks of birds have also been known to signify something important — even an omen.

Numerous accounts of birds appear as signs from above. Ancient texts often reference heavenly messengers taking the form of birds to deliver divine messages or warnings.

Biblical stories such as Noah’s dove and Ezekiel’s vision feature birds as messengers sent by God.

In classical mythology, ravens served as companions to the gods, delivering their words to humankind below.

Though these tales may bring comfort and reassurance, some people are more skeptical when interpreting bird activity for spiritual meaning.

The existence of spiritual significance behind the presence of birds is still up for debate today.

Some say that we should always look for deeper meanings behind what we see in nature, while others choose not to read into it too much and focus on more tangible explanations for certain phenomena.

Ultimately though, how each person interprets bird sightings is entirely up to them — it’s just a matter of personal belief and preference at the end of the day.

Birds are both beautiful and mysterious creatures.

Whether you believe they are a sign from heaven or not, it’s undeniable that they have been powerful symbols throughout time.

From transformation to guidance, joy to abundance and wisdom—birds can carry many meanings.

The next time one flies around you, try to take a moment and reflect on what it could be trying to tell you. It might give you the necessary clarity to move forward on your journey.

If a bird or flock of birds suddenly appears in your life, it is a sign that should not be ignored.

The spiritual meanings associated with these animals are powerful and can provide guidance and comfort in difficult times.

Pay attention to the actions of the birds as well as their behavior, and you will be able to decipher what message they are trying to send you. Have you ever had an experience with birds that left you spiritually connected?